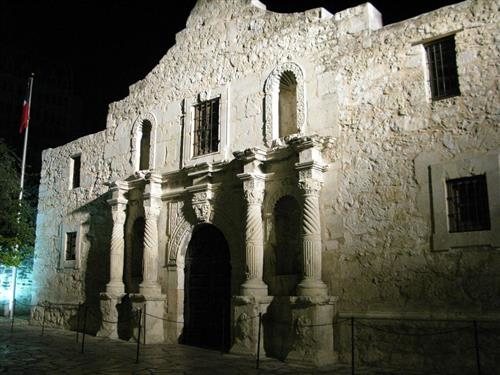 The Alamo was originally built as a mission, which served as a base to Christianize Native Americans in the 18 Century. The mission became a fort during the Texan Revolution, a series of battles between the Mexican army and a militia of Texans and adventurers who gathered in Texas to defeat the Mexican army. At the Alamo in February and March of 1836, a two-week battle raged between 146 Taxans, who killed more than 1,600 Mexican soldiers. In all, about 4,000 Mexican soldiers eventually defeated the Texans. But, word of Mexican General Santa Anna quickly spread throughout Texas, and rallied thousands of men to stand and reclaim their terriroty. It is said that Santa Anna ordered the execution of the six soldiers who survived the bloodbath. When his general refused, Santa Anna slashed the men to pieces with his own sword. After the Mexican army returned to their camp, Santa Anna assigned a contingent of soliders to return to the mission and clean up the bodies of the dead. The soldiers returned quickly to the camp and reported that six demons with fire in their hands were guarding the gates of the mission. A second group of soldiers, led by a colonel, returned to say the demons screamed at them as they approached the mission, and had fists of flames.

Disclaimer: Texas Haunted Houses does not endorse or support trespassing to visit real haunts. Before you visit ANY local real haunt, make sure to acquire the appropriate permits and/or permissions, and be respectful of privately owned properties. Countless Haunt Hunters have been arrested, ticketed, and reprimanded by the authorities for trespassing. To avoid this, be sure to get in touch with the property owners before visiting a haunt, and respect their hours of operation, local regulations, and rules for visiting at all times. Happy haunting!
All information on this page was submitted to Texas Haunted Houses and was believed to be accurate at the time it was posted. Please report any inaccuracies here.